Fellow Freedom Fighters, this is an exciting time with so much work ahead of us! So, get strapped in for an incredibly active summer!

First, I am thrilled that the next RPSC Board meeting will be at Globe Lanes in Random Lake on Monday, June 13. I believe this is the first time that the Board will meet away from the HQ and in the southwestern part of Sheboygan County. This is part of our commitment to reach every part of Sheboygan County. The doors will open at 5:30PM for food and beverages with the meeting starting at 7:00PM. We look forward to seeing you there for a spirited discussion on key events and issues. Please see the attached agenda for a list of topics.

At this year's Lincoln-Reagan Dinner, we heard from a number of GOP Candidates for state-wide elections.

We believe that informed Republican Voters are the best.

In order to be informed, we have put together a list of all GOP Candidates so you can make an informed decision when you cast your ballot later this year.

RETAKE THE HOUSE AND SENATE

Please Help Us Staff HQ During Our Expanded Office Hours. 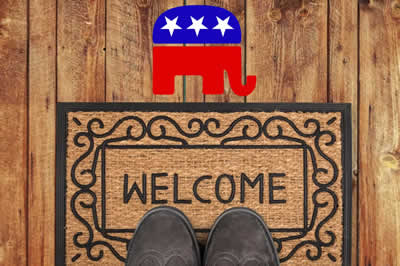 Sen. Ron Johnson has launched a web site. He states, "In order to counter their lies, distortions, and smears, I will be providing detailed facts to cut through the political rhetoric and arm people with real information."

HISTORY OF THE REPUBLICAN PARTY

Founding of the Republican Party

On July 6, 1854, just after the anniversary of the nation, an anti-slavery state convention was held in Jackson, Michigan. The hot day forced the large crowd outside to a nearby oak grove. At this “Under the Oaks Convention” the first statewide candidates were selected for what would become the Republican Party.

Birthplace of the Republican Party

United by desire to abolish slavery, it was in Jackson that the Platform of the Under the Oaks Convention read: “…we will cooperate and be known as REPUBLICANS…” Prior to July, smaller groups had gathered in intimate settings like the schoolhouse in Ripon, Wisconsin. However, the meeting in Jackson would be the first ever mass gathering of the Republican Party.

The name “Republican” was chosen, alluding to Thomas Jefferson’s Democratic-Republican Party and conveying a commitment to the inalienable rights of life, liberty, and the pursuit of happiness.

Though popularized in a Thomas Nast cartoon, the GOP’s elephant symbol originated during the 1860 campaign, as a symbol of Republican strength. Republicans envisioned “free soil, free speech, free labor.” Under the leadership of President Abraham Lincoln, the GOP became the Party of the Union as well.

The Republican Party called for the abolition of slavery.

President Lincoln issued the Emancipation Proclamation, but it was the entire Republican Party who freed the slaves. The 1864 Republican National Convention called for the abolition of slavery, and Congressional Republicans passed the 13th Amendment unanimously, with only a few Democrat votes.

The early women’s rights movement was solidly Republican, as it was a continuation of abolitionism. They were careful not to be overly partisan, but as did Susan B. Anthony, most suffragists favored the GOP. The 19th Amendment was written by a Republican senator and garnered greater support from Republicans than from Democrats.