Skip to content
Home » Trouble In The City of Sheboygan? Latest News

(Editor’s Note: This story is a follow-up to that posted on Sunday, and includes remarks from Wolf’s attorney)
Outside voices have perhaps been the loudest in the controversy surrounding a call for the termination of Sheboygan City Administrator Todd Wolf. The chair of the Republican Party of Sheboygan County, Russ Otten, called on supporters to “pack the Common Council chambers so that the crowd spills out into the hallway!”
Those behind the move have said little-to-nothing publicly, preferring to wait for results of an investigation into Wolf’s conduct to speak for them during tonight’s 5:15 p.m. Special Meeting of the Common Council.
Wolf has been, as former mayor Mike Vandersteen put it, “somewhat muzzled as a part of this, and his attorney can say stuff.” Vandersteen told WHBL on Sunday afternoon that he was surprised by the move and “didn’t see it coming at all…”
Meanwhile Wolf’s attorney did send out a release Sunday evening which stated: “I have requested records from the city related to any investigation into Mr. Wolf and have not received any records or responses. I have also not received any investigation report or any other documentation even discussing this investigation, the charges therein, the allegations, or what was determined in the investigation. I intend to ensure complete transparency from Mayor Sorenson and the Common Council because the public deserves elected representatives that allow for accountability and transparency in government. Mr. Wolf has carried himself with honesty and integrity during this time, just as he did while serving as City Administrator for Sheboygan.”

What's Going On At City Hall? 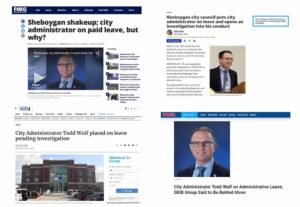 Elected officials at the City of Sheboygan City Hall have found themselves embroiled in a controversy of their own making. On November 7th, Sheboygan Mayor, Ryan Sorenson, moved the Common Council to a closed session.  When they returned, Sheboygan Alderman, Barbara Felde, made a motion to place City Administrator Todd Wolf on paid administrative leave effective immediately. The council made the decision in an 8-2 vote, with Trey Mitchell and Joe Heidemann voting against the motion.

Since many of those involved in this decision, have chosen not to comment, we can only report on what has been published in various media outlets.

We have gathered this information to inform RPSC members and the public at large.

As more information becomes available, we will update this page.  Any RPSC members, public officials, or concerned members of the public who have further information on this controversy that they would like to share, please contact us at [email protected] .  Your confidentiality will be protected.

Fellow Patriots, you have heard about the corruption at City Hall and how the Common Council voted on November 8 to suspend (with pay) Todd Wolf, the City Administrator, in order to launch an "investigation". To date, no allegations have been made with no charges filed. This is a witchhunt, led by the Diversity, Equity, Inclusion, and Belonging (DEIB) group, because Todd would not capitulate to their demands for $70,000 to hire their people to do diversity training for City employees.

At our RPSC special caucus on Monday, Todd and Debbie Wolf were introduced to a standing ovation of love and support, followed by a stirring address by Todd's attorney, Jennifer DeMaster. It was quite a moment!

I am excited to announce that you can now assist Todd and Debbie with their quickly increasing legal costs. Please use the following link and donate what you can.

Also, I have one more request. Please pass this story and link on to at least 3 others in this community who may not know about this growing story. Even if they choose not to donate, at least they will be aware and can spread the news.

God bless each of you for your prayers and financial support! 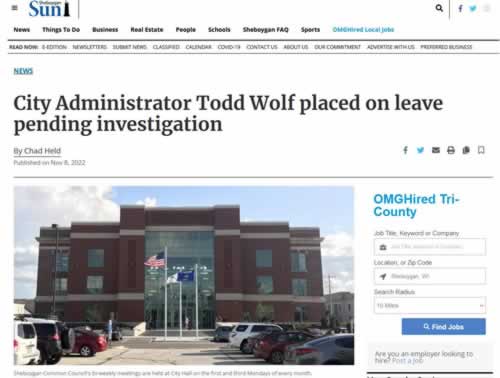 SHEBOYGAN – After convening in closed session for over two hours at Monday night’s bi-weekly meeting, the Sheboygan Common Council placed City Administrator Todd Wolf on administrative leave pending investigation.
Since the matter was considered in closed session, council members could not comment on the reasons for their decision. The Council voted 8-2 in favor of the leave, with Joe Heidemann and Trey Mitchell the only dissenting votes. 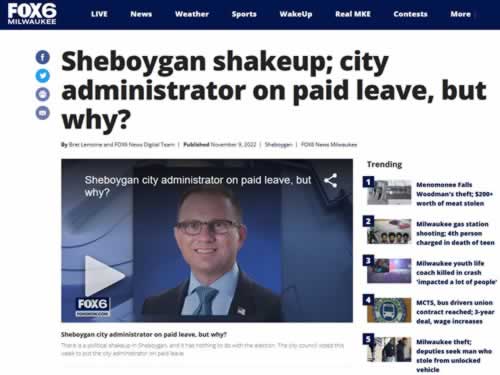 SHEBOYGAN, Wis. - There is a political shakeup in Sheboygan, and it has nothing to do with the election. The city council voted this week to put the city administrator on paid leave.

During the Sheboygan Common Council meeting on Monday, Nov. 7, City Administrator Todd Wolf sat next to the mayor and council members not knowing what was about to happen next. 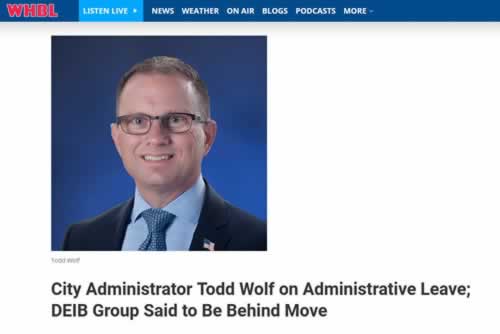 Wolf’s removal from City Hall followed a 2-1/2 hour closed meeting that was convened at the request of what an attorney for Wolf describes as an “activist group” of “self-proclaimed extreme ‘diversity’ collectives” within City Government. The group, comprised of members of the City’s Diversity, Equity, Inclusion and Belonging group is, according to Wolf’s attorney, attempting a power grab through bribery, corruption, threats, political favors, wasting of taxpayer dollars, and discrimination practices at City Hall. 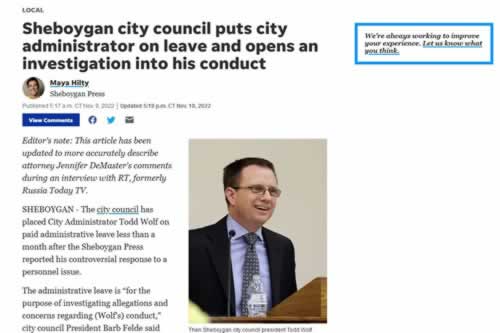 SHEBOYGAN - The city council has placed City Administrator Todd Wolf on paid administrative leave less than a month after the Sheboygan Press reported his controversial response to a personnel issue.

The administrative leave is “for the purpose of investigating allegations and concerns regarding (Wolf’s) conduct,” city council President Barb Felde said Monday. The city attorney will hire outside counsel to conduct the investigation.

This is the logo for the Facebook Page of Sheboygan DEIB that was mentioned in the FOX 6 Video.